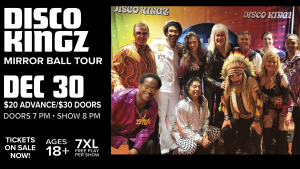 DISCO KINGZ–THE ULTIMATE DISCO EXPERIENCE takes you on a magical history tour of the Disco era!

So much has changed since ‘disco fever’ ruled in the 1970s, but one thing absolutely remains: Disco’s infectious feel-good music brings on a seriously fun disco party! DISCO KINGZ – THE ULTIMATE DISCO EXPERIENCE brings that fun all over again to people of all ages.

Disco Kingz consists of eleven multi-talented musicians from around the country, including a 3-piece horn section, multiple lead singers, and even a disco dancer! This unique, 90-minute high-energy show features an electrifying light show, costumes, and choreography true to the era, and special effects orchestrated to this live music performance that will have you jumping

out of your seat and leave you spellbound!